Jason Lustig is a scholar of modern Jewish history and culture, and he is currently the Israel Institute Teaching Fellow at the University of Texas at Austin’s Schusterman Center for Jewish Studies. Previously, he has held the Harry Starr Fellowship in Judaica at Harvard University’s Center for Jewish Studies and the Gerald Westheimer Early Career Fellowship at the Leo Baeck Institute. His research and teaching focuses on intellectual history, historiography, and the history of archives, and he holds a Ph.D. from the UCLA Department of History. He has previously taught Jewish history at UCLA and the University of Southern California, and his research has been published in the Journal of Contemporary History, American Jewish History, Archival Science, History of the Human Sciences, and elsewhere. 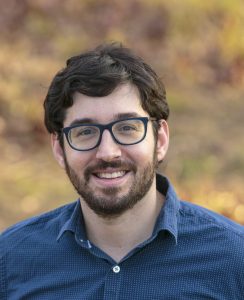 His book, titled A Time to Gather: Archives and the Control of Jewish Culture, will be published by Oxford University Press. Is the first systematic investigation of the history of Jewish archives in modern times, and it examines the emergence of centralized archives for Jewish history within a transnational context—in Germany, the United States, and Israel/Palestine—and the active role of archives and archivists in the development of Jewish history as a discipline alongside their place in the negotiation of a rapidly changing world. Ultimately, he delves into the question of how and why Jews created archives the world over, and how such activities led directly to struggles over who could “own” the past. A Time to Gather argues that archives and archiving represented a means for Jews to physically manifest a past that they felt was slipping over the threshold of history—a feeling only sharpened by the Holocaust. With the destruction of European Jewry, archival aspirations led to intense battles over who could lay claim to the past.

This project represents part of a broader research program that investigates how Jews have approached their past and thereby constructed visions of the future. He also focuses on the early history of Zionism, the transformation of Jewish life following the Holocaust, and the legal and social issues surrounding the restitution of cultural and communal property looted by the Nazi regime, which was the focus of his peer-reviewed article “Who Are to be the Successors of European Jewry? The Restitution of German Jewish Communal and Cultural Property,” published in the Journal of Contemporary History.

Jason received his Ph.D. from the UCLA Department of History, and he holds a Masters of Arts in Near Eastern and Judaic Studies from Brandeis University, where he wrote his M.A. thesis on the history of the American Council for Judaism. See his complete Curriculum Vitae.

Primary teaching and research interests: Jewish history, historiography, and nationalism in transnational context; modern European history and world history; history of Zionism, its critics, and the Jewish settlement and state in Israel/Palestine; history of archives and the organization of knowledge; Judaism post-Holocaust; restitution and cultural property.